The Kiahuna Golf Club is a sanctuary for many of Kauai’s endangered species including the state bird of Hawaii…the Nene. 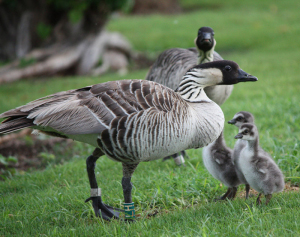 Golfers may also spot the rare Hawaiian Stilt and the very shy Moorhen along Waikomo Stream. The Black-Crowned Night Heron can be seen fishing along the club’s numerous water hazards.

To the left of the fifteenth fairway is what is left of the house in which a Portuguese immigrant lived during the early 19th century. The man was charged with controlling the irrigation of the surrounding ag land by diverting the Waikomo Stream that cuts across the northwest corner of the course. Also nearby is the crypt in which the man and his family were laid to rest.